How to Implement – Steps 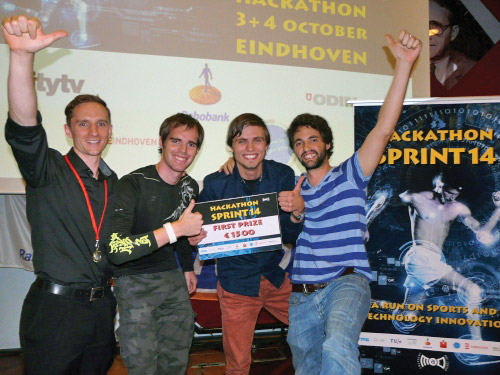 The Fieldlab in Eindhoven organised a hackathon, in cooperation with the organisation MAD and Eindhoven University of Technology and supported and sponsored by several companies. Designers, artists, engineers, hackers, craftsmen, students and sportsmen joined this event to design, hack and build experimental and daring concepts for sports innovation. After 32 hours of hard work, ten teams pitched their concepts and prototypes to the jury.

The overall winning team was RunRight with a combination of a shoe sensor and a wristband as a smart running assistant solution. The 1500 euro voucher was used for coaching and prototype development at the FieldLab. In addition they won a 1500 euro voucher and a wildcard for a Start-up Bootcamp. Four additional winners were each rewarded with a 500 euro voucher. The results of the hackathon were exhibited at the annual national sports innovation congress.